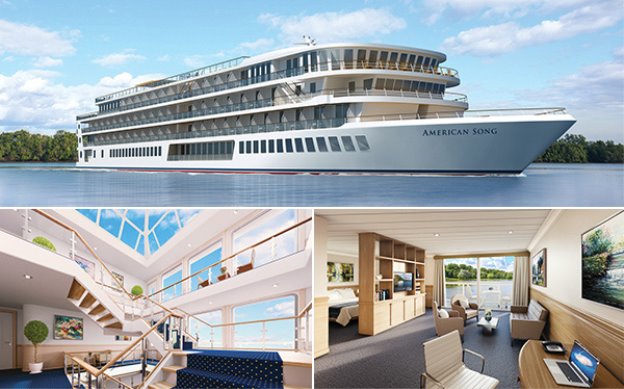 American Cruise Lines’ new riverboat American Song departed from the Port of New Orleans this past Saturday, October 6, 2018.  Underway at 100% capacity, this new riverboat is off to a great start and is cruising the Mississippi River on its 8-day inaugural sailing between New Orleans and Memphis.  American Song’s 184 guests are enjoying the cruise with stops at Oak Alley, Baton Rouge, St. Francisville, Natchez, and Vicksburg, arriving in Memphis Friday, October 12th.

American Song is equipped with many modern features, including a unique bow with a retractable gangway.  The interior design offers a five-story glass atrium with spacious lounges and sweeping views throughout the ship. The vessel offers the largest staterooms in the riverboat industry, with floor-to-ceiling glass doors, and private furnished balconies.

While we spend most of our time talking about ocean going cruise ships and lines, I’ve been keeping an eye on the growing river boat market in the United States.  While this has traditionally been dominated by classic design paddlewheelers, modern river boats are debuting and American Song will be the first.

American Cruise Lines is pleased to announce that the first modern riverboat in U.S. history is nearly complete. This week, American Song, under its own power, moved from the East Outfitting Basin at Chesapeake Shipbuilding in Salisbury, MD, to the yard’s outfitting pier for the final touches.  The vessel is set to make its inaugural cruise October 6, 2018 on the Mississippi River from New Orleans—during the city’s Tri-centennial year.

American Song’s sister ship, American Harmony, the 2nd riverboat in the series, is currently five and a half weeks ahead of schedule and will be launched later this fall.  American Harmony will go into service in the spring of 2019 on the Mississippi River where it will join two of American’s Victorian-style paddlewheelers, Queen of the Mississippi and America.

When it debuts this October 2018, American Song will cruise the Line’s Lower Mississippi River itineraries for the remainder of the year (including American’s holiday-themed cruises throughout December) and reposition to the West Coast on the Columbia & Snake Rivers in 2019.

American Song and American Harmony are both designed and built by Chesapeake Shipbuilding in Salisbury, Maryland.

American Cruise Lines was recently awarded Cruise Critic’s 2018 Cruisers’ Choice Award for Best River Line in the U.S. & Canada.  In 2018, American operates the largest and newest fleet of authentic paddlewheelers, coastal cruise ships, and of course the American Song in 2018 & American Harmony in 2019.  With over 35 itineraries visiting 25 states, the company cruises along the rivers, as well as the coastal and inland waterways of New England, Alaska, the Pacific Northwest, the Mississippi River system, and the Southeast.

You can read more about American Song, including deck plans, here.